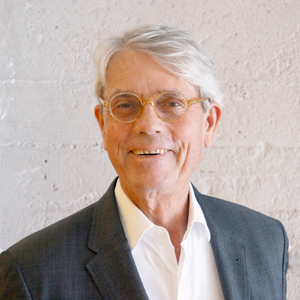 William Fain is an architect and urban designer with an international reputation and a long list of professional honors. He is a native Californian who took degrees from UC Berkeley (Bachelor of Architecture) and the Harvard Graduate School of Design (Master of Architecture in Urban Design), also spending a term at Manchester University in England. Mr. Fain worked with Jacquelin T. Robertson as an urban designer in the Office of Midtown Planning & Development of New York City during the Lindsay administration. Continuing his work in the public sector, he served as senior architect and urban designer for the Boston Redevelopment Authority while at Harvard and senior architect and urban designer for New Community Development Corporation in Washington, D.C. In 1980 he joined Pereira Associates as Director of Urban Design and transitioned the firm to its current status since its inception in 1987. During his career, he has won two separate Fellowships from the National Endowment of the Arts and Humanities and was the recipient of a Rome Prize Fellowship at the American Academy in Rome, Italy. He has taught at Harvard University and the Southern California Institute of Architecture.

Mr. Fain has practiced architecture and urban planning for over 35 years. He is the managing partner and directs master planning and urban design for Johnson Fain, a firm of 50 architects, planners and interior designers, headquartered in downtown Los Angeles. With extensive experience in urban design, community planning, downtown redevelopment and transit-oriented development, his career has focused on advancing the practice of urban design as a bridge between the public good and private benefit. His projects have won several national AIA and Progressive Architecture awards including Mission Bay in San Francisco, Beijing’s new Central Business District, the Greenways Plan for Los Angeles and the American Indian Cultural Center in Oklahoma.